← Back to list
Latest news in Russia
Gas production and supplies: results for first half of January
Rosneft and SPIMEX to cooperate in the development of exchange trading in carbon units
NOVATEK’s 2021 Reserve Replacement Reached 107%
NOVATEK reports modest climb in gas output in 2021

The operator of the controversial Nord Stream 2 pipeline from Russia to Germany said it has filled the new pipeline with natural gas and is ready to begin deliveries.

"As of December 29, the gas-in procedure for the second string of the Nord Stream 2 pipeline has been completed," operating company Nord Stream 2 AG said in a statement quoted by AFP.

"This pressure is sufficient to start gas transportation in the future," the Switzerland-based company added.

The new pipeline, which runs under the Baltic Sea, consists of two parallel strings capable of transporting a total of 55 billion cubic meters of gas a year.

Nord Stream 2 AG said in a statement in early October that the first string of the pipeline would be gradually filled to build inventory and pressure.

The new pipeline was completed in September after years of controversy but has not yet received regulatory approval from Germany. The regulator has said the approval process is likely to drag into the second half of 2022.

The pipeline is controlled by Gazprom, Russia’s state-owned gas giant. Gazprom CEO Aleksei Miller also said on December 29 that the second line of the Nord Stream 2 pipeline had been filled with gas and that the link is ready for gas exports.

Russian President Vladimir Putin told a government meeting that Miller attended that the addition of the pipeline will help stabilize prices on European markets. 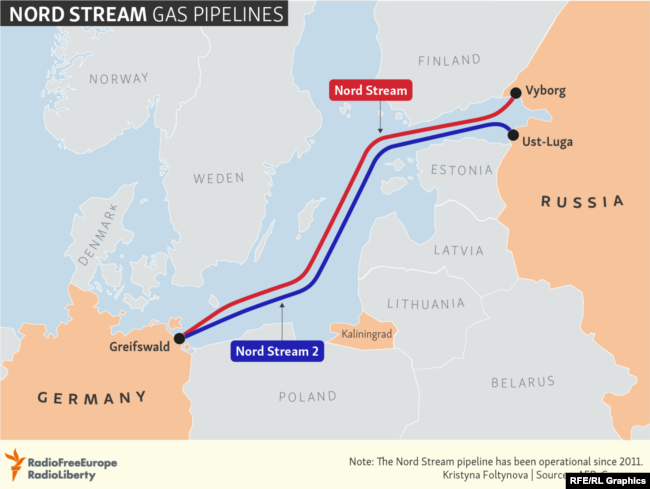 Western countries have for weeks accused Russia of limiting gas deliveries to put pressure on Europe to complete the regulatory process amid tensions over Ukraine.

Putin and Gazprom have rejected the accusations and say Nord Stream 2 is a purely commercial project.

The Baltic Sea pipeline has been controversial for years. Germany says it needs the natural gas to help its transition away from coal and nuclear energy, while critics say the project will increase Europe's dependence on Russian gas and could be used to apply political pressure.

Poland and Ukraine have been particularly vocal in their opposition, with Ukraine saying it will deprive it of transit fees. The United States has also opposed it, and some U.S. lawmakers have suggested sanctions targeting Nord Stream 2 to counter any new Russian military move against Ukraine.

With reporting by Reuters, AFP, AP, and TASS