Oil and gas discovery in the North Sea

Equinor and partners ExxonMobil, Idemitsu and Neptune have discovered oil and gas in exploration well Echino South, 35/11-23, by the Fram field in the North Sea. Recoverable resources are estimated at 6-16 million standard cubic metres of oil equivalent, corresponding to 38-100 million barrels of oil equivalent.

“We are making one of this year’s biggest discoveries in the most mature area of the Norwegian continental shelf (NCS), not far fr om the Troll field. This demonstrates the opportunities that still exist for value creation and revenue from this industry,” says Nick Ashton, Equinor’s senior vice president for exploration in Norway and the UK.

“After more than 50 years of geological surveys on the NCS, we are still learning something new and finding hydrocarbons wh ere we previously thought there were none. By utilizing existing infrastructure, these resources may be recovered at good profitability and with low CO2 intensity,” says Ashton. 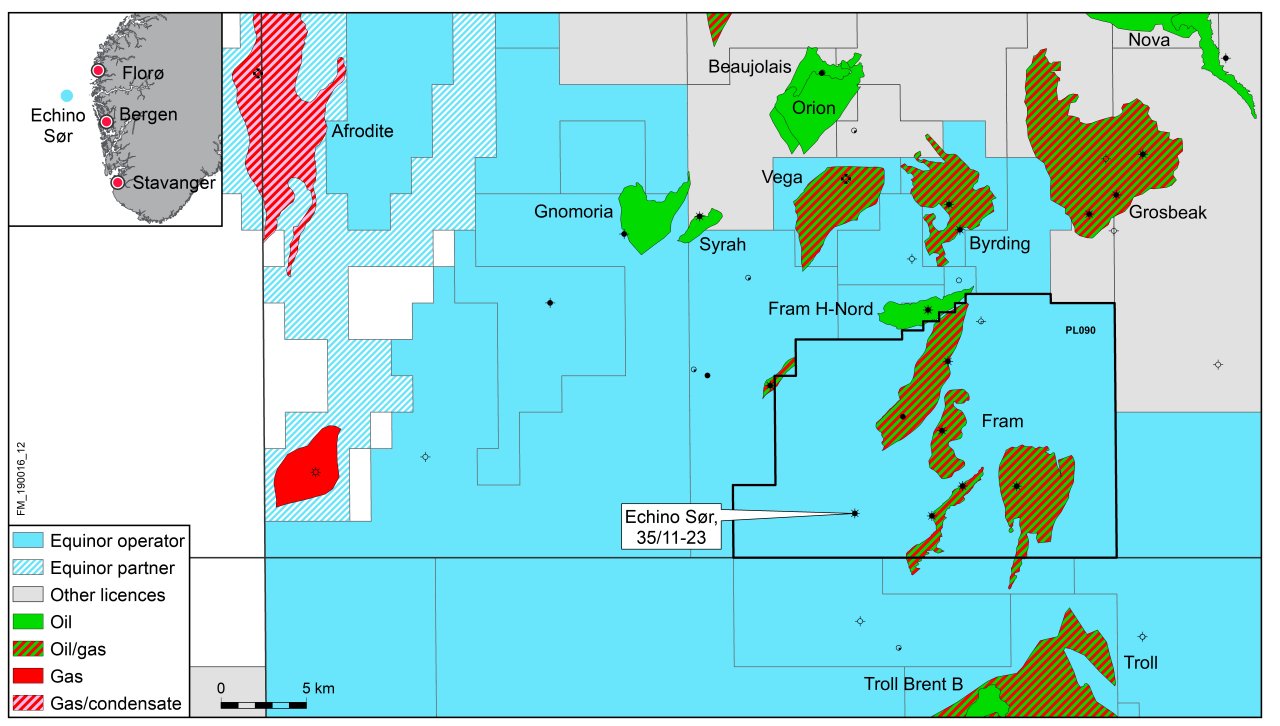 The primary exploration target was to prove petroleum in the upper Jurassic reservoir of the Oxfordian age (Sognefjord formation).

The secondary exploration target in the well was to prove petroleum rocks of the middle Jurassic period (Brent group).

Hydrocarbons were proven in both exploration targets.

A sidetrack (well 35/11-23 A) is being drilled to delineate the discovery in the Sognefjord formation.

The licensees in production licence 090 are Equinor Energy AS (45%), ExxonMobil Exploration and Production Norway AS (25%), Idemitsu Petroleum Norge AS (15%) and Neptune Energy Norge AS (15%).

The well was not formation tested, however, extensive amounts of data have been acquired. Well 35/11-23 was drilled to a vertical depth of 2947 metres below sea level. Water depth is 350 metres.

The well will be permanently plugged and abandoned after sidetrack 35/11-23 A has been drilled.

The well was drilled by the Deepsea Atlantic drilling rig, which will drill production wells on the Askeladd North field in production licence 064 after it has completed the sidetrack